In the semi-circle adjoining Akmens Bridge and AB Dam

As part of the Boris and Ināra Teterev Foundation’s programme "Art in Public Space", a permanent large-format work of art was unveiled in Rīga’s urban environment, in the semi-circle adjoining Akmens Bridge and AB Dam, in the form of the second section of artist and Art Academy of Latvia Professor Ojārs Pētersons’ object “The Large Vase”, the original section of which is located outside the National Library of Latvia.

The art object “The Large Vase” is a whole entity divided into three parts - the biggest of which is located outside the Castle of Light, while one quarter was installed in September 2016. The outer surface of the external sections is covered with a ceramic mosaic, which reflects Garlieb Merkel’s text – one letter has been placed on each of more than 14,000 ceramic tiles. The ¾ of the object outside the NLL weighs 15.5 tonnes. An integral component of the work of art is a publication, created by the artist and containing the fragment of Merkel’s text, which will be available in Latvia’s public libraries. The fragment in the publication has been translated into English, French, German, Spanish and Russian.

“Anyone can think of connecting these parts together, filling them with his own content," stresses artist Ojārs Pētersons. "The source of inspiration for the creation of the works of art is Garlieb Helwig Merkel’s book “Vidzeme’s Ancient Times”, which would more aptly be described as 18th century contemporary art than a historical testimony of the Latvians of that era".

The work of art is subject to broad interpretation. "The vase’s granite insides allude to our latitude and rural environment, while its ceramic outer with Merkel’s text fragment accents the accumulation of European culture and historical experience, which is also attested to by the vase’s form, ” explains curator Helēna Demakova.

“The Large Vase” was one of the award-winning projects in the “Riga Smiles” competition organised by the foundation in the spring of 2013. The decision to install the work of art outside the NLL was ratified by the NLL’s commission of art experts with the final approval being conferred by architect Gunārs Birkerts.

Ojārs Pētersons (1956) graduated from the Art Academy of Latvia’s (AAL) Design Department in 1980 and has been a lecturer at the AAL Visual Communication Department since 1990. When it comes to creating public works of art, artist Ojārs Pētersons has acquired vast experience of doing so in Latvia, Finland, Sweden and Germany. In August 2014, his two-part orange sculpture “The Bridge over the Sea” was unveiled in the German city of Eckernförde. The Rīga section of the work is being stored together with the works of art of the future Latvian Museum of Contemporary Art until such time that a suitable location can be found for it in Rīga’s urban environment. 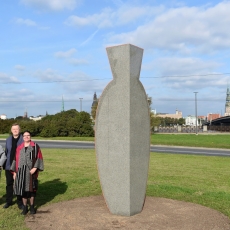 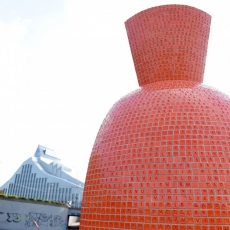 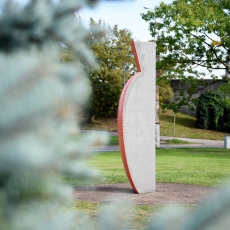 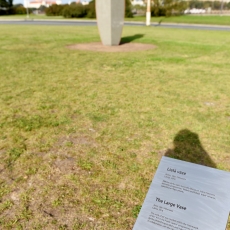 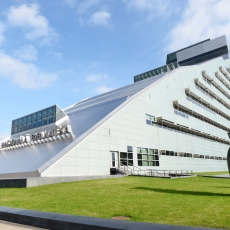 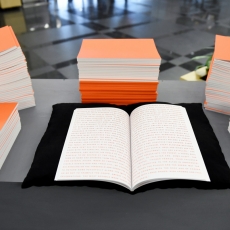 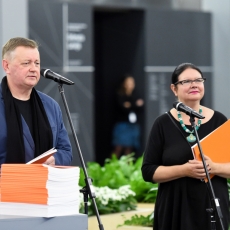 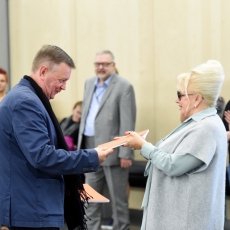 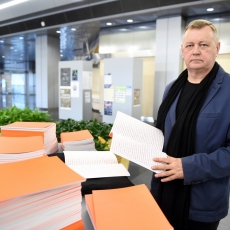