“Brodsky/Baryshnikov” will return to audiences in Riga in May

Alvis Hermanis’ production of “Brodsky/Baryshnikov” is being performed at the Baryshnikov Arts Center in New York (USA) until 19 March. In May, the show will return to audiences at the New Riga Theatre. Performances in Riga will take place at 19.00 every evening from 20-24 May.

Sales of tickets to performances of “Brodsky/Baryshnikov” in Riga will begin on Friday, 8 April at 10.00. Tickets will be on sale on the Internet only. Follow the latest news on the New Riga Theatre homepage.

The production was conceived under the auspices of Boris and Inara Teterev’s arts program TÊTE-Á-TÊTE 2015 and became one of the most popular attractions in this series of European contemporary cultural events.

In this one-man show, legendary artistic figure Mikhail Baryshnikov interprets the poetry of his friend, winner of the Nobel Prize in Literature, Joseph Brodsky in his native language. Through text and movement, the production beckons the audience into the poet’s world, allowing it to experience first hand Brodsky’s complex, lyrical and enthralling word games.

In turn, in New York the New Riga Theatre will give its first ever guest performances in the United States. The venue where the productions are being performed, the Baryshnikov Arts Center is the fruit of its Artistic Director Mikhail Baryshnikov’s long nurtured dream to create an arts center in New York where artists from all over the world can gather. This vision was realized in 2005 when the Baryshnikov Arts Center was founded in Manhattan, laying the foundations for what is now a thriving creative space. 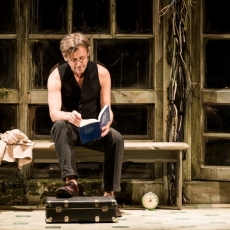